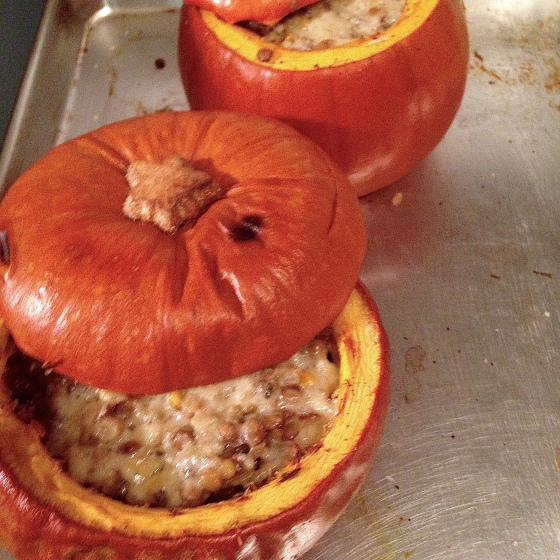 What an amazing time of year in the North American food calendar. The summer harvest has wound down but the fall harvest is still in full swing. The food is as good as it gets. This dish is supremely seasonal and perfect to tote along for a Friendsgiving potluck dinner. The herbs and lentils give it a savory and meaty flavor that can satisfy even your most enthusiastic carnivores.

Want it with meat? No problem. Just brown and add italian sausage and half the amount of fennel seed.

Slice off the top of the pumpkin and scoop out the guts. Set the seeds aside for roasting later.

Salt and pepper, then put the top back on the pumpkin, and place in the heated oven with a 30 minute timer set.

Get working on the rice, follow instructions based on which grain you use. Brown rice is just fine but the wild rice gives it a more distinct flavor and look.

Meanwhile, in a separate pot, saute your sliced leek with olive oil, salt and pepper. Keep the heat on medium / medium low if using a leek. They’re more sensitive to the high heat than a regular onion. Once it’s melted down a bit add chopped garlic, the chicken stock and the lentils. Salt and pepper again, add a layer of sage, thyme and fennel seeds and cover. Simmer the lentils 20-30 minutes to soften.

Check on the pumpkins. You want the flesh to be soft inside but not quite separating from the skin yet. Poke with a fork, if it yields it’s done. Take out of the oven and set aside.

Once the rice is finished and the lentils are cooked, combine the two and mix in the grated parmesan. You really can’t add too much cheese. I put down a cup as a guide but the point is to add the cheese until the mixture is saturated. Taste throughout, the herbs and fennel seed should give the stuffing the flavor of sausage. If it’s bland add more cheese or salt. Not savory enough? Add more herbs. Feeling fancy? Toss in a thick pat of butter. It’s the holidays! Live a little!

Stuff the pumpkins with the mixture and cover the top with a layer of parmesan. Place back in the oven for 10-15 minutes.

Serve with a large spoon for scooping or slice the pumpkin into wedges for plating.

This will keep warm for a long time. You can prep it at home, wrap it in foil and a towel and bring it to your party.

Email me pictures at mancookgood@gmail.com or mention me on instagram @mancookgood. 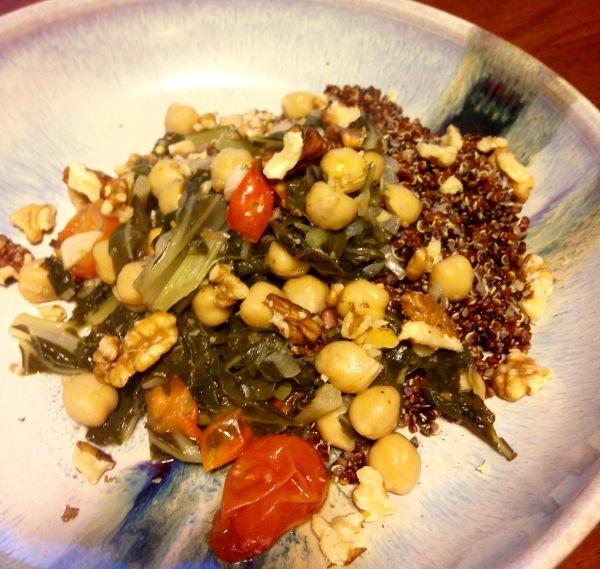 Inspiration struck at dinner the other night, my wife and I were celebrating her return from a trip to the east coast and opted for some pasta. She allows us a carb waiver from time to time and this particular night we really went after it, having bread and house made pasta at an excellent restaurant in Culver City, CA called Bucato. Their ever changing menu featured a dish that was essentially just chard and garbanzo beans with a lemon butter sauce. It’s simplicity was striking and richness of flavor impressive enough for me to tackle the concept at home, albeit with substantially less butter and salt I’m sure. Do not be intimidated by the use of the word “sauce”. It is merely a mix of liquids naturally present in the cook and heated until it reduces a bit. Nothing major here! This is a great way to take advantage of the flood of in season greens that is soon to be upon us. Try it! Substitute chard for spinach or kale if more handy. Add a splash of white wine to the sauce if you’d like, don’t forget to splash some in your glass too!

Chard and Chickpeas in a Lemon Garlic Sauce

This plus some broth is all it takes

Rinse and dry your greens, chop them into chunks and put in a bowl. Set aside. Juice the two lemons and remove the seeds.

Take a large skillet, put it on medium and toast your walnuts. A few minutes on the heat, give them a stir and a shake, a few more minutes. Set aside and wipe out the pan with a wad of paper towels. (Careful, hot!)

Dice up your shallots, garlic and chop the tomato. Pour olive oil into the skillet and let heat up a few minutes on medium high. If you really want to get this to a restaurant type flavor profile use butter and olive oil. Butter is amazing. It’s also kind of bad for us. Olive oil only tonight. Add the shallots to the heat and let them bloom. Smells good… that’ll get your neighbors attention. Salt and pepper it.

Once they are starting to soften, add the garlic and tomatoes. Pour in a splash of the chicken stock and let it reach a boil. After a few minutes of this add the rinsed garbanzos and stir. Add more broth in batches, a little at a time. Give the beans 5 minutes on medium high heat and add the green chard. Pour in half the lemon juice, stir and cover. Taste as you go, have a spoon nearby dedicated to the purpose.

We’re about halfway there

The chard will reduce pretty quickly. After 5 minutes covered, stir it up, add more broth and keep the cover off.  At this point it’s almost come together. Add the rest of the lemon juice and pour in any remaining broth. Turn the heat up to high and let the water content steam off. The liquid will become a sauce right before your eyes. Add salt and pepper to taste, you want the liquid to be rich in the flavors of the lemon, garlic and chard.

Take off the heat. Serve over pasta, rice or chicken. Sprinkle the toasted walnuts over the mixture. We ate ours spooned over quinoa with sliced chicken breast on the side. A delicious and simple splash of seasonal gourmet… at home… in under a half an hour.

I remember the day my wife (then girlfriend) told me she wanted to stop eating meat.

She was never much of a meat eater but always ate what I cooked. In those days my food was pretty standard fare. Meat. Vegetable. Starch. The occasional meatless dish usually featured pasta, and even then hopefully a sausage link or meatball or two on the side.

So I mourned. Not only for the ease of ordering and restaurant selection but for the style of cooking I had begun to develop. What would I cook? Did I now have to make two versions of everything? What about the meeeeattttt?

Now years later I (again) have my wife to thank for another transformation. These days I cook meatless more than not. I’m not talking about tofu flavored sprouts or factory made “chik’n”. I hate that stuff. I’m talking about hearty, delicious entrees that fill you up and don’t leave you lacking.

When cooking vegetarian the key is to work protein in as much as possible. This dish, with lentils, swiss chard, almonds and feta is loaded with protein and vitamins. The use of oregano, sage and fennel seeds give the lentils a very meaty flavor. Don’t feel up to a vegetarian dish tonight? Brown some sausage and add it to the mixture at the end.

Start by chopping up your veggies. Dice them up pretty small, especially the carrots. Heat up some olive oil on medium high and get those onions in the pot. Salt, pepper, a layer of sage, oregano and  two dashes of fennel seeds. Add the celery and carrots.  Shake out another layer of sage and oregano. Toss in the chopped garlic. Stir.

Once that has all started to work together pour your vegetable broth over the whole thing, dump in your lentils and cover. Add a bay leaf and turn the heat to medium.

Now for the swiss chard. This is a pretty robust leaf. If you bought it from a farmers market or in a bunch like me it’s quite the handful. I filled up the clean sink with cold water and broke the chard down by hand into more manageable pieces. Remove the really big stalks with scissors or a knife and work your way through it all, stopping occasionally to stir your lentils. You want them on a light boil and the cover on so you don’t reduce the liquid too much.

Run your swiss chard through a lettuce spinner. If you don’t have a lettuce spinner you’re in for some work. You should buy one anyway. Next time. Shake the leaves out by hand, press them with dish towels and accept that they’re going to have some moisture on them. No big deal.

At this point I would take the cover off of your lentils and let the liquid reduce down to about half of its original volume. Add the chard in batches, filling the pot, covering it, stirring it, covering it, repeat. You may think it can’t handle more but don’t worry it will reduce considerably. Add some more herbs. Salt and pepper again. Once you get the chard in stir occasionally while letting it cook.

Chop up some almonds and toss them in a small skillet on medium low heat. Let the almonds toast up with an occasional stir.

Taste the lentils. Too firm? More time. Liquid reduced too fast? Add some water. Watery? More heat, less cover, more spices. The lentils and chard are done when there is enough liquid left to be a sauce but not quite a broth. Add the lemon juice, give it a good stir and turn off the heat. Give it 5-10 minutes to cool down a bit and let the flavors calm down and mix together.

Scoop on its own or over a grain. Add the almonds and some feta cheese at the end.